Since last year, Nedam is the 4th Croatian cave reaching depth beyond 1000m. Like with the other Croatian caves deeper than 1000m, Nedam is situated in North Velebit and more specifically in the massif of Hajducki kukovi, quite close to Lukina jama and Ljubuska jama. Until June 2020 its known depth was -1021m, the cave survey can be seen here. The cave follows an endless meander with narrow passages and active water flow in the deeper parts. The exploration here continues.

Team of two of our members took part in the preparation for further exploration in Nedam.

In the period 06-07 June, Tsvetan Kosturkov joined the team in order to check the current state in the cave and to start putting the logistic foundations needed for the further research there. During this weekend, the team managed to:

Video can be found here:

In the period 20-27 June, Pavlin Dimitrov and Tsvetan Kosturkov participated in the actual preparation for the August camp. Their stay went as follows:

Saturday – arrival
Sunday – equipment preparation, transport and reaching the bivouac at -600m
Monday – equipping cable to -600m and re-reging
Tuesday – moving and setting the bivouac from -600m to -950m Wednesday – exploration beyond -1021m, reached depth -1100m and it continues
Thursday – getting out
Friday – already on the surface, hike through Hajducki kukovi in the area of Rosijeva kuca and Vratarski kuk
Saturday – time to say good bye

Toward the entrance of Nedam

Stories around the camp fire

Base camp and the big boss, Marko

At the entrance of Nedam

Calling base camp from bivouac II at -600m

From -600m towards the unknown yet bottom

Thanks for the support @Bim Sport @Petzl 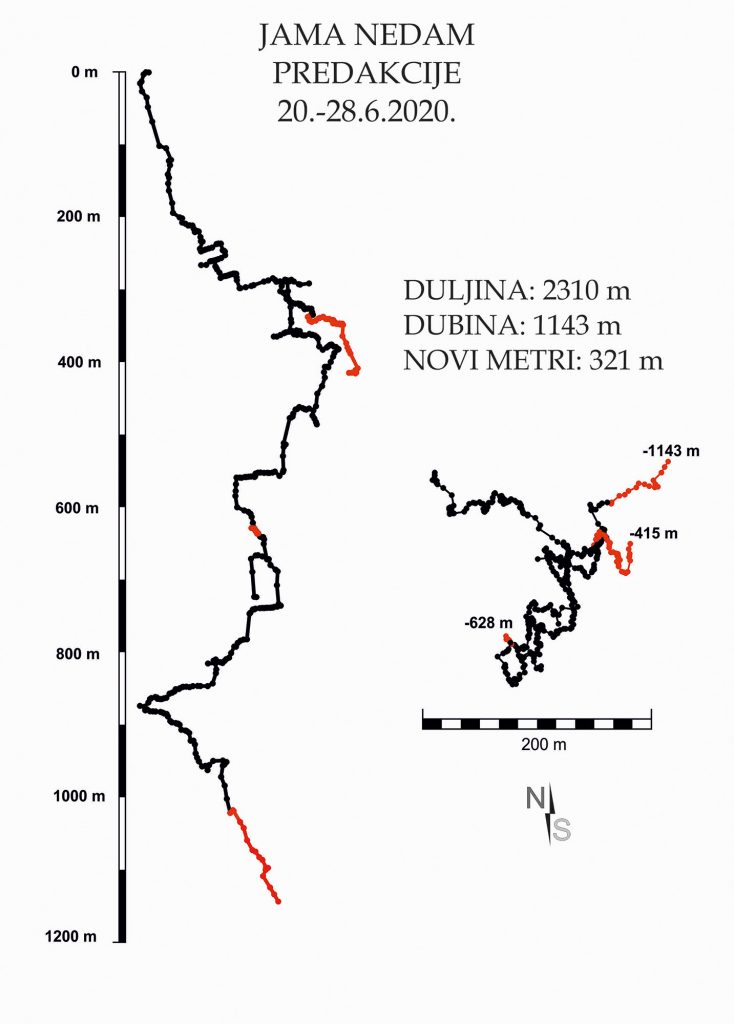 All in all during this preparation the team managed to prepare all of the needed infrastructure and explore to -1143m. Now Nedam has 3 bivouacs and cable to -950m enabling smooth and easy communication, additionally some parts of the cave are re-rigged.

We hope the August camp will bring more exciting news about how Nedam develops in depth!

Huge thanks to our friends from SO Velebit for the spot on organisation, efficient tasks allocation and execution  and the so fun atmosphere!