Milosh from Montenegro invited us fo the new year to Opasna jam. There were several questions left from the summer expedition. We gathered a small team from Bulgaria – me, Svetli and Mimi

After my last (and first) expedition there, the main channel was explored further and it was reached a depth of -385m. Last pit finishes with a meander and a small stream going on it. The Milky way’s exploration wasn’t finished too but the expectations were to unite with the main channel.

We started on 31 with two teams: Bane and Milelna attacking Milky way and team 2: me, Svetli and Matija going to the main channel. Group 1 started about 10:00 and groups two about 11:00.

The meander starts narrow and unpromising. After several small pits and a little lake it became bigger and started going down and deep.  We wandered a while to choose our way because on some places the meander was wide and not safe to climb but on other too narrow to pass. Svetli went down, Matia tried to work on a narrow place where we thought is the best way and I went in the upper part to check where it goes. I reached a new pit after 20 meters and I could hear Svetli somewhere under me. He too reached a pit. It turned out that the upper part is better and we chose to attack the pit from here because we will pass the narrow and not safe places. The pit opened under us big and humming.

We organized our tasks – Matija went back to take the rope left in a caving back under the last pit, Svetli started to put spits and I cleaned the rocks around. The rock was hard but after 40 minutes we had rope, two clown plates and Y knot to the center of Earth. Svetli started first and I and Matija watched him going slowly in the deep empty pit. He reached a rock where he made another point and continued further. At 10 to 5 o’clock all the team was on the second balcony of a pit with a diameter about 15m… New river appeared on the right, high chimneys and our small stream a little bigger rumbling behind us. We entered a collector chamber with two rivers, up was a chimney, down – we don’t know what. Our time was running out and we didn’t have equipment to continue so we started to go back. Roughly the new pit is 40-50m deep and we were about 30m from the last map point.

At the night there were happy news from team two too. Milky way continues too. All our rope and equipment were used and we didn’t finish end on any place. Next group – Milosh, Bane and Ivana went to map the Milky way. For now on the map it looks like the two main channels are too far and will not unite soon. This we will see better after all new places are mapped. 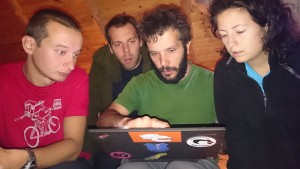 A few words for our camp – we spend our nights in a cozy house part of the “Old House Kucka Korita” complex – many hut-like houses build from stone and with wood inside. For 50 euro you get two floors – one living room with bath and 2th floor is a sleeping room. This was perfect for our 8 person expedition – 7 people on the 2th floor (3 of the ladies slept together on the wedding bed)  and 1 person on the sofa down. It was very luxury cave expedition after cave you have  shower and warm place on the sofa! 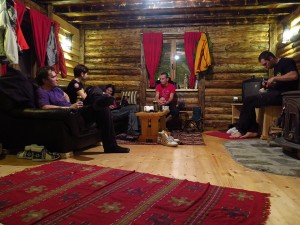 We also took a walk around the amazing Kucka korita and of course one of the main attractions – the Chetnik’s pub where the glasses are all time full with cornel liquor and slivova rakia. Over the Cjevna canyon is a stunning view to Prokletija, Maja Arapit top and memories from the summer expeditions (can you find Maja Arapit on the picture below?) 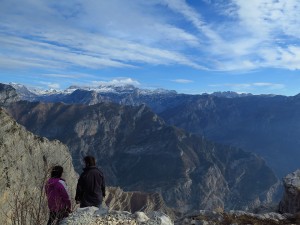