Tell us more about yourself in terms of your cave interests. How did it all start?

When I was 14, my parents and I were on a hike in the Crimea, where they had just opened the tourist cave Mramornaya  for visiting , I was very surprised that it was possible to explore such unusual places. In the autumn, I enrolled in a children’s cave club at the Palace of the Pioneers, where at that time the legendary Soviet speleologist Tamara Ivanovna Krapivnikova was teaching. I liked  it very much , there we mainly explored the horizontal labyrinths of the caves of Western Ukraine and after I finished school I came across a seminar of the Ukrainian Speleological Association of Karabi-Yayla and so  my vertical speleology started.

As for work, I’ve done all sorts of things. I have an economic education, but my main rule is that the work does not interfere with speleology. To this day, I have lived in four countries, I worked as a photographer, a  journalist, a guide, a manager, I had my own company producing clothes and equipment for cavers …

Since 2015, I have been actively organizing trips around the world, in the mountains and not only.

Why did you start exploring the caves and why do you keep doing it?

As a child, I dreamed of being a spy, but I was only worried that I would be tortured and unable to keep secrets.  And so I grew up and fulfilled my dream – I became a spy but without the danger of revealing a secret. Although it is sometimes painful.

I like the speleology because it is multifaceted, everyone can choose what they like – technical aspects of equipment, topography, bat research, photography or beginners training, exploring deep precipices or horizontal mazes. You can also change your activities within speleology in connection with a change of your interests or physical capabilities.

Which club or organisation do you think you are part of?

I consider myself part of the Ukrainian Speleological Association. 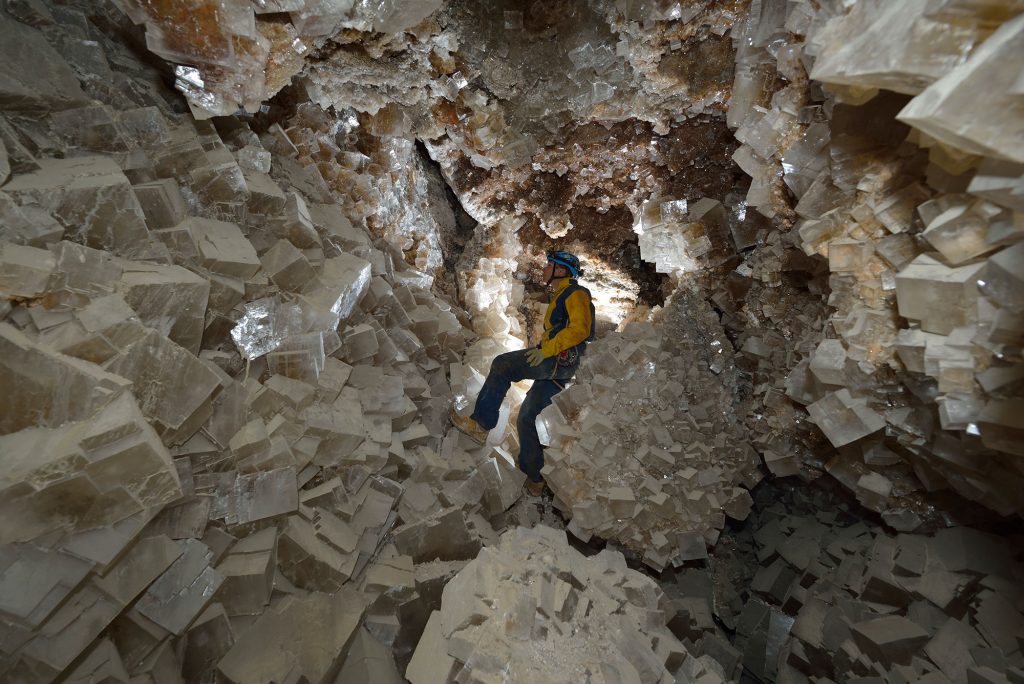 What is your favorite cave or exploration area? A brief history of when and how you  discovered this cave, area, etc. The most exciting period during Kruber-Voronya’s study- you are the first woman in the world to go deeper than 2000 m into a cave, aren’t you ?Length, potential, etc. Characteristics of the caves – narrow or specific places, temperature, rivers, waterfalls, blockages, etc.

In general, my favorite thing is to explore deep vertical caves from the so-called. “Alpine” type. Such are the caves that develop mainly downwards, such as in the Caucasus or Picos de Europa, and there are caves with a labyrinthine character, when the galleries are in all directions, but with difference of more than a kilometer between the lower and upper points, as in the Pyrenees.

Yes, I am the first woman in the world to descend below 2000 meters in the Krubera-Voronya cave, but for me it doesn’t matter much, the important thing is that I was part of the trio that explored the lower part of the cave until this point, and that expedition that crossed that line for the first time on the planet. Although, it is also more a matter of luck.

And just going down to 2000 meters, especially in Voronya, is not so difficult, neither for men nor for women, it is quite a simple cave. Of course, for those who are accustomed to explore the cold vertical caves of alpine type.

We know that you took part in the French expedition to Patagonia, can you tell us a little more about  that?

Expeditions to Patagonia (Chile), the French (from the association of speleologists “Center Terre” ) conduct more than 20 years, I have long wanted to get there and thanks to my numerous participation in French cave rescue courses and my friendship with French speleologists I succeeded in 2019.

From the point of view of speleology, this is not very interesting – it is impossible to find a cave over a kilometer deep  in the Madre de Dios archipelago where we work. But this is a very remote point on the planet (about 24 hours of ocean navigation to the nearest settlement), really  no human footsteps – a real expedition, as in the books of Jules Verne, nature and landscapes are amazing and unlike anything else. I think this romance of far and incredibly difficult logistic travel attracts many people . Plus, everyone on the team works very well as a team – one or three of us can’t do such an event in any way, even if you’re a super cool dude like Bernard Turth for example. I was very impressed with this side of the process and it was very nice to be a part of it.

Scientists from different fields work together with speleologists – microbiologists, glaciologists, meteorologists – it is very interesting to communicate in such a team. But you have to know French or at least Spanish (Chilean boys are also in the lineup, some French speak a little Spanish), I know Spanish, I study French. The expedition lasts a little more than two months (for a shorter period it makes no sense to organise all this), but in the -it is so difficult) but in middle there is a rotation – some people go for the first month, some for the second, and another part for both. The next expedition was supposed to take place last winter, but for obvious reasons it was postponed for January-February 2023. I really hope our plans come true. You can follow the preparation and then the expedition itself on the website https://www.centre-terre.fr/. And you can also participate financially (there is a button there) – after all, the whole expedition is funded by the participants themselves, sponsors and just people who support us.

There is a cave on Arabica (note of the Abkhazian translation in the neighboring valley of Kruber-Voronya) – Vakhushti Bagrationi (-360 m), in which I conducted 4 expeditions, so I would like to return to it and continue my research. I’m sure it will be a new kilometer cave. But for now, unfortunately, it is impossible to work there.

What did you learn about yourself in general, about your friends, about life thanks to speleology?

It’s hard for me to say, because speleology is what shapes my personality, its center. I’m more of a speleologist than a Ukrainian and more like a speleologist than a woman. I mean, I have a lot more in common with any speleologist in the world than with any Ukrainian, for example. When you work with a person underground for two weeks, then sometimes he knows you better than your husband or relatives and even if you do not speak the same language. Just in a cave you can always see the most important thing for a person – what he really is.

And I like that – all people are real, there is nothing to hide – only the body, strength of spirit and your sense of humor.

If you have experience with cave incidents, would you like to share them with other cavemen so that we can learn from this experience? What advice would you give in case of an accident? Tell us about your participation in the French cave rescue courses?

Yes, I have experience in real rescue operations. But fortunately it is not as numerous as it could be after 25 years of speleology.

I would advise not to lead to accidents. It is much easier to work preventively through training and seminars and training of instructors. I believe that thanks to the good technical base that Ukrainian cavers received at the speleological seminars in Crimea under the leadership of Yuri Kasyan, we have had virtually no serious incidents in the caves.

What to do in case of an accident depends on the accident, but it is better to choose a cave according to your knowledge and experience, to use high quality equipment that you fully know how to use, etc. And the French are a separate topic, they have many caves, many people walk in them, not just cavers – according to statistics, every third French citizen has been to an unequipped cave at least once, can you imagine? Therefore, there are many accidents. And so as not to try to limit the government speleological activity (so that there are any unnecessary problems), the French cavers decided to do it themselves with these issues and reached great heights in this.

What I like about the French rescue school is the coherent logic system. Every technique or unit or equipment used has a clear knowledge of why this is so and not otherwise. All “for some reason” and “for something” without fiction. In addition, due to constant practice, this system is constantly evolving and since I am very interested in the technical aspects of the equipment, I am interested in developing in this system.

What is your approach to cave courses for beginner cavers? How to attract new people, how long the course takes, what you focus on in training and finding new  people?

This is a difficult question for me – I know many ways to attract people, how to teach them and in what consistency so that it is interesting and safe for them, but I do not know how to make cavers out of them. I know that there is no way, maybe, there are just cavemen and one day they join such a course and learn about themselves.

I conducted many courses, classes, seminars and even somehow “raised” a team of cavers – and as a result they went into deep caves, but the research speleology, where it takes a week to clear the blockage and lie in a puddle with a hammer, did not attract them at all.

The world is large and diverse, and the opportunity to explore it in all its manifestations is perhaps one of the most interesting things to do.