Tell us something about yourself in terms of caving experience.

I began caving about 10 years ago. At first, I went caving once every few weeks, but today I visit a cave every weekend with my caving partner Reuven (Ruvi)  Zakai and try to participate in at least one caving expedition abroad each year. My favorite caving activity is digging and exploring new caves or new cave passages, but I also take part in the effort to complete the survey of all known and newly discovered caves in Israel. From time to time we are also asked to help archaeologists and scientists enter caves to collect samples and findings.

What made you start exploring caves and why you are still doing it?

I have always loved nature and hiking, first with my family and then with friends. One time we chose to visit a cave in the Dead Sea area. Beyond the amazing beauty of the cave formations, I instantly got fascinated with the sense of adventurousness and immediately knew that I want to visit and explore more caves.

Even though I have already visited hundreds of caves, I am always fascinated and am still discovering new and special things.

The experience of discovery, the possibility of reaching places where no human foot ever been, combined with the physical challenge of crawling in narrow places and climbing ropes, makes caving my favorite activity and I find no reason to quit. 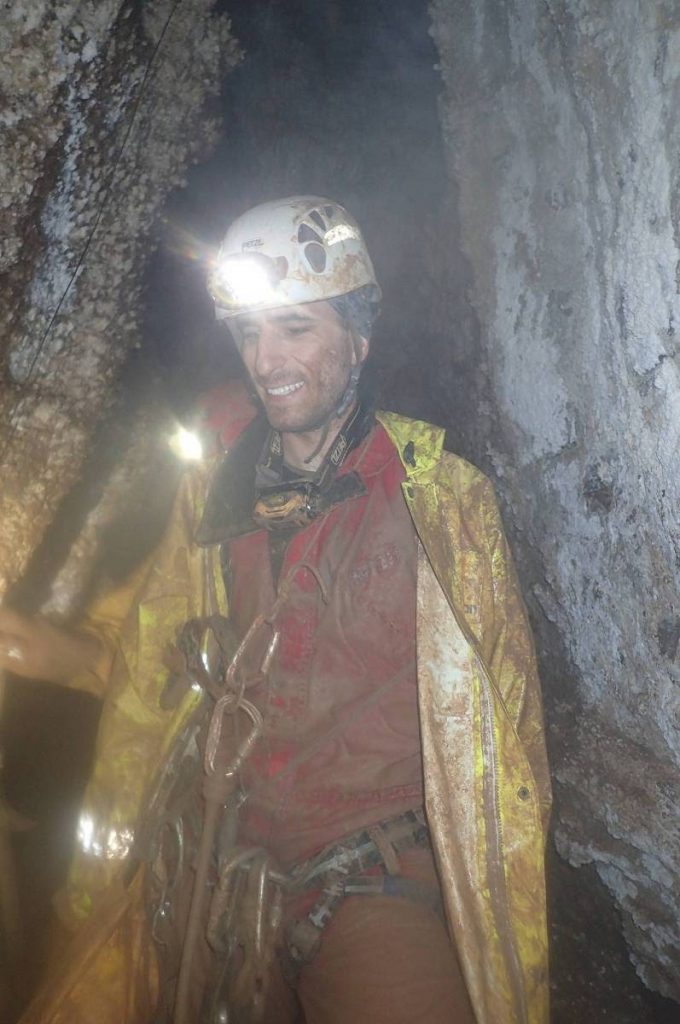 To which club/organization you feel you belong? Tell us something more about this group of people or organization, something about the main drive behind your activities and projects.

I am not an official member of any caving club  but I am in close contact with the Israeli Cave Research Center (ICRC) and perform a variety of tasks for it.

ICRC is the main organization that coordinates cave research in Israel. It belongs to the Faculty of Geology of the Hebrew University in Jerusalem but collaborates with other universities and faculties.

Beyond ongoing research and activities, from time to time the ICRC leads large-scale operations such as surveying the world’s longest salt cave, salvage excavations in Judean Desert caves, documentation of the refuge caves from the period of the Bar Kokhba revolt and more.

Participating in these activities gives me satisfaction in contributing to scientific research, which sheds light on the geological  and historical development of the region.

Because leading researchers take part in these activities, I learn a lot and enrich my knowledge from them.

What about your favourite cave, area of exploration or region?

The Peqi’in range in northern Israel is my favorite caving area. This is a karstic region that has been explored by cavers for more than 30 years. in the 80’s, only 40 caves were known in this area, but each year, new caves are discovered and today we know about more than 300 caves in this relatively small area.

The caves in the Peqi’in range are mostly vertical shafts or a number of connected shafts, however sometimes these shafts break into halls of spectacular formations.

The average depth of the shafts is 50-80 meters, yet about 10 caves are deeper than 100 meters. The shafts are usually nice and wide (although some are just tight cracks), but the first and last meters can be tight and require squeezing.

There is no permanent water flow in the Peki’in caves (or any other cave in Israel) but during winter it might be flowing and walls are always wet. Although there is no flow of water, the caves are very muddy and the mud is more dense and sticky than any mud I have encountered in other caves anywhere in the world. The cave temperature is around 15 degrees throughout the year so there is no need for a thermal base layer nor an undersuit.

The main dangers in Peki’in are the fall of  loose rocks in the new caves that we are digging, and spiders and snakes bites. We try to work safely and fortunately have had no major incidents and I’m not aware of any major incidents in this area.

We do not have specific plans for Peki’in but we try to visit it frequently, especially during the summer months when it is too hot in the south of Israel and there is no mud in Peki’in. Almost every visit we discover a new cave or continuations in a known cave. 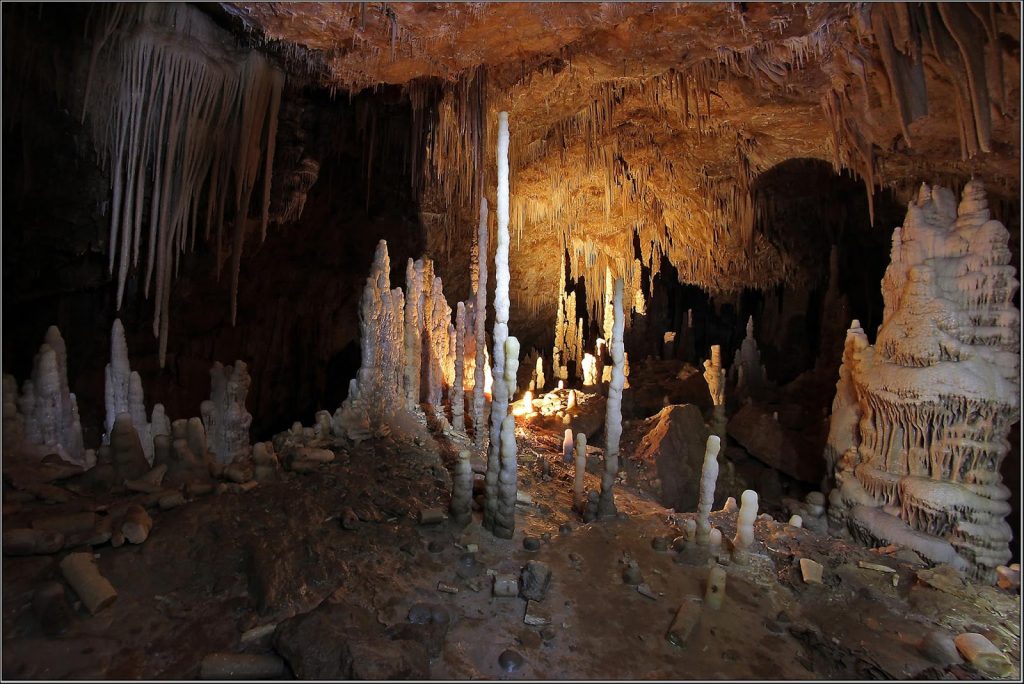 You are from Israel, I’ve heard there is a lot of history and archeology in the caves there. Can you share details or something interesting about such caves?

Because Israel has been inhabited since the dawn of history and is an important crossroads, many historical and archaeological remains can be found in caves throughout Israel.

The Caves of Nahal Me’arot are a UNESCO Site of Human Evolution. In the caves there are many findings from the Paleolithic period. The findings include the first human burial site, the earliest possible encounter between Homo sapiens that migrated from Africa to the Neuro-Asian Neanderthals.  The study of these caves sheds considerable light on the transition from the simple nomadic Palaeolithic cultures to the later Neolithic agricultural culture.

A partial skullcap of a modern human, found in Manot cave is estimated to be 54,700 years old, is the oldest known modern human found outside Africa, and the first physical evidence that supports the “Out of Africa” theory, which states that modern humans left Africa around 70,000 years ago.

The Dead Sea Scrolls and the Qumran Scrolls were found In the caves of Qumran, Morba’at cave, Cave of Horror and the Cave of Letters and other sites in the Judean Desert.

The discovery of the scrolls is considered one of the most important archaeological findings in the Land of Israel. The period of writing of the earliest of them is estimated to be  the second and the first centuries BCE. This is the earliest Hebrew manuscripts that include a version of the Bible in Hebrew.

It is very common to find archaeological finds in caves in Israel. Most of these are pottery shards but it is possible to encounter complete vessels or coins and it is very important not to move them and report them to the Antiquities Authority because they may be of historical importance.

The longest Salt cave was explored in Israel recently. Can you tell us more about salt caves and their exploration?

In the south of Israel, on the shores of the Dead Sea there is a unique natural phenomenon, Mount Sedom, a mountain entirely made of salt. Because the salt is very soluble, dozens of caves were created in the mountain. Inside these caves are the same formotions common in Karst caves but in Sedom it made out of salt.

The study of caves at Mount Sedom began in the 1970s, headed by Prof. Amos Frumkin. At that time, Malham cave, named after the Israeli Cave Research Center (ICRC) was already the longest cave in Mount Sedom and also in Israel.

Recently, the cave was re-surveyed, including new sections that were discovered after the original survey in the 1980s. The survey expedition was organized by the Israel Cave Explorers Club, in cooperation with the Caving Club and Speleo School Sofia of Bulgaria and other cavers from around the world.

The results of the survey showed that the Malham cave is more than 10 kilometers long, making it the longest salt cave in the world.

Research of salt caves is fascinating because the caves change rapidly due to salt solubility and frequent earthquakes in the area.

Measurements conducted in the salt caves as part of Professor Frumkin’s study have taught us about the changes in the level of the Dead Sea throughout history and the process of the creation of Mount Sedom. 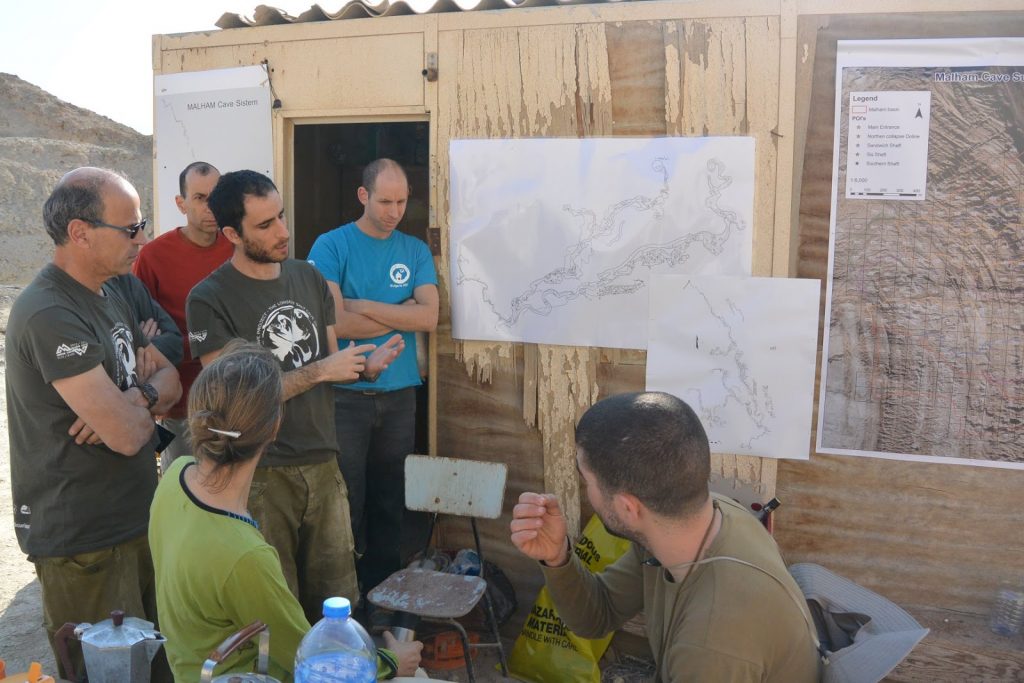 What you have learned (in general about yourself, friends, life, etc.) through caving?

In the past I was very suspicious and did not trust other people. The need to entrust your life to a friend or even a stranger who rigged the cave has taught me to rely more on people.

In cases where I got stuck in tight passages, sometimes in the dark or away from other cavers, I learned to cope better with crises and to remain calm in moments of stress.

If you have experience with cave incidents would you share with other speleologists, so we can all learn from your experience. What would be your advice in case of incident?

Happily, I never had a serious accident while caving. Sometimes rocks fell on me or my anchor collapsed but it always ended with only minor injuries or less. So the only advice I can give is always wear a helmet and back up you anchors.

What is your approach toward cave courses for new cavers, i.e. how you attract new cavers, how long the course lasts, on what you put an emphasis, etc.?

In the past, I used to voluntarily train new cavers in SRT. The course took three weekends during which we practiced basic SRT maneuvers which are needed to travel safely in a vertical cave and basic troubleshooting

After the course I took the apprentices to trips in caves during which I explained to them the safety rules in caves.

Unfortunately, none of the people I trained continued in caving and since I invested so many weekends in training with no results I just stopped spending time on it.